Bobbi Kristina was so upset she called the actress a ‘man.’ It all began when Whitney Houston’s daughter announced that she wanted to play her mother in a biopic that will air on Lifetime later this year. Bassett, who is making her directorial debut on the Whitney Houston biopic, didn’t agree and chose Yaya DaCosta for the lead role.

When asked to further elaborate on why she didn’t cast Bobbi Kristina, Bassett admitted that she was the furthest one from her mind.

“I did not think about casting her,” Bassett told Entertainment Weekly. “And probably for a number of reasons, you know. One being that she’s not an actress. I know she’s acted here and there. I know she’s been on their family’s reality show, but she’s not an actress and acting is a craft. It’s an attempt to illuminate the complexities of human behavior and life. And this is a very fast-paced schedule; we have just 21 days to tell this story. It’s more than just saying lines and turning the light on. You have to drive the story—there’s a technical aspect.” 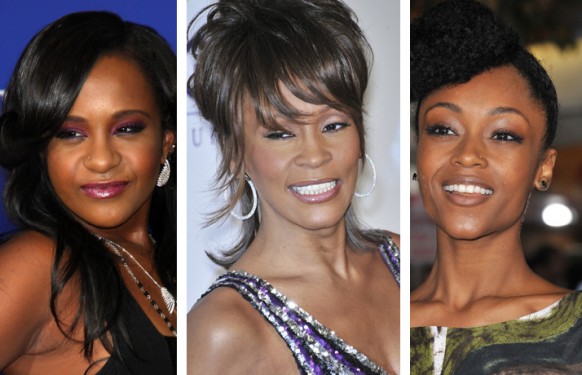 Bobbi Kristina fired back on Twitter after she heard Bassett’s comments.

Bassett revealed in another interview that the family was not onboard with the movie.

“They’re not participating,” Bassett said. “We reached out to them in the early days; of course we’re not going to do the movie and not say anything to them. You can if you’re using public domain, but that’s not our desire. We paid our respects and let the conversation be had, just to get their okay. They certainly could have been not involved and against it.”

Bassett said the movie will focus on the positive things that took place in Houston’s life rather than the negatives.