Black Ink Crew stars Ceasar and Dutchess are having a rough patch in their relationship.

It appears their relationship may be over after what the two said on social media. On Wednesday night, Ceasar posted a subliminal tweet about a ‘bitch’ who called the police on him.

Ceasar did not mention names, but the tweet rubbed Dutchess the wrong way. She alluded domestic incident that may have taken place between the two.

Read the tweets below. 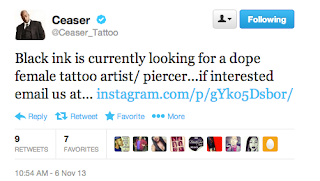 Ceasar and Dutchess began dating during season one of the hit VH1 show.

Since then, relationships with some of the other costars have been ruined because of it. Many believe Dutchess was overstepping her bounds as a girlfriend.

Photos via Stupiddope.com and VH1.com