Well, at least for now. Many fans are skeptical about the feud with her estranged fiancé, but the reality star claims the relationship is over. Chyna took to Instagram minutes after Kardashian told his Snapchat followers that she had left their house with baby Dream to tell her side of the story.

“I’M DONE!” Chyna wrote on Instagram. “This entire year I have done nothing but help Rob! It’s so SAD & PATHETIC how low he’d stoop to cover up HIS PERSONAL ISSUES!”

Chyna continued, “I have done nothing but help and loved him from the beginning! It’s Chy here I got my own!!! I was doing swell before I got with him! Rob asked for all of this! Rob begged me to have Dream! He stressed me out my ENTIRE PREGNANCY!!! Accusing me of cheating, going crazy on me with massive text blast daily! being an absolute lunatic and then cover it up with gifts! I was verbally abused every other day. I was still there with nothing but high hopes for us!”

Chyna added, “[I]PUT MY PRIDE ASIDE & I GAVE UP MY HOUSE TO MOVE INTO KYLIE’S HOUSE WITH HIM TO BE WITH A MAN!! We weren’t together in that house two whole weeks before he starting calling me all types of bitches & hoes! AND I NEVER NOT ONCE CHEATED ON ROB! EVER!” she continued.

Chyna also seemed to address the screenshots of messages posted to her Instagram account by a supposed hacker earlier on Saturday.

“Those Messages OLD AF! He only did this because when he went through my phone he couldn’t find anything to be mad about! He’s on snapchat acting hurt but he’s yet to come see Dream yet! He knows where we are!” Chyna said. “Honestly it’s only so much a person can take.”

Chyna added, “Everyone has tried to help Rob. I’ve gone beyond to help and so has his family! I’m done with the situation until he gets help. I have no longer have time to feed into Robert’s shenanigans I have 2 children and myself to fend for. What hurts the most is watching him do this to me knowing my last situation and promising to never put me through it. Especially after our child is only 1 month.”

Soon after, Kardashian went on his own Instagram page to respond to Chyna’s claims.

“I have never been this heartbroken in my life. I don’t mind being so open or if anyone thinks I’m being weak but I don’t play when it comes to Family and Chyna was my Family and thought we were getting married,” he shared. ” I truly loved Angela. I gave everything I owned for her. Didn’t know I was just part of her plan. I really believed she was in love with me the way that I was with her and I am so hurt and never felt this before.”

“It’s different when you have a kid with someone. And after reading Chyna’s messages to her best friend she was going to drop me after a year. She didn’t even make it to that. I am so broken,” he continued. “This is a woman I fought my entire family for. I was in love with this woman to the fullest and I was none of that to her.”

“I thought this was going to be the best year of my life had a beautiful baby Dream and haven’t spent Christmas with family in years and I just can’t believe she really hurt me this way,” he wrote in another post. “Chyna knew exactly what she was doing to get me. I can’t believe she did this to me.”

“This isn’t for some ratings, this is my real life so please understand I’m just being open right now,” he said. “Chyna’s messages and her leaving with everything and the baby I am broken. I go 1000 percent for my girl. I am so confused how a man who gives and loves everything about a woman is the one left alone.”

“I’m sorry for being so open once again this is killing me,” he concluded. 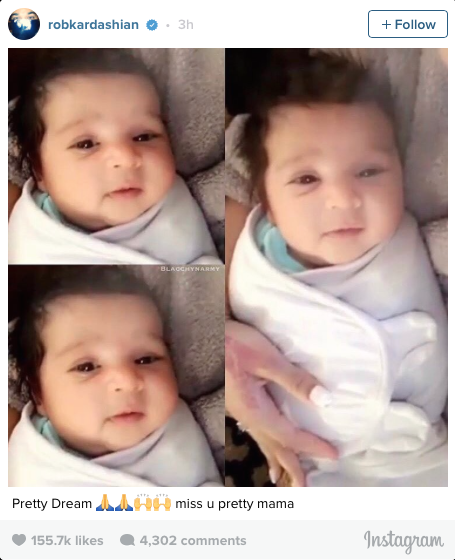 The feud began when Chyna’s Instagram page was hacked. Direct messages to her lawyer and best friend allegedly revealed that she was only marrying Kardashian to get name trademarked. She also allegedly told her best friend that Kardashian was lazy and fat and was going to leave him in a year.

Read all the messages below. 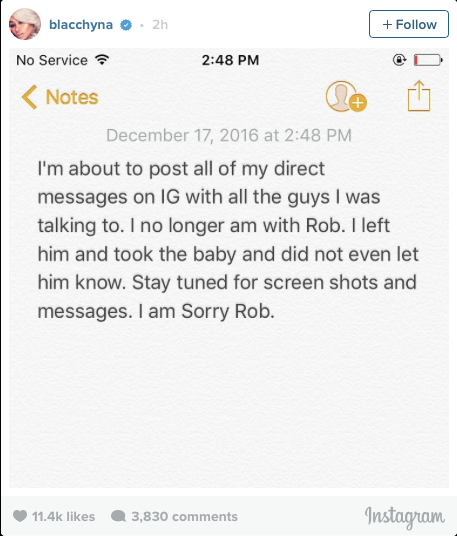 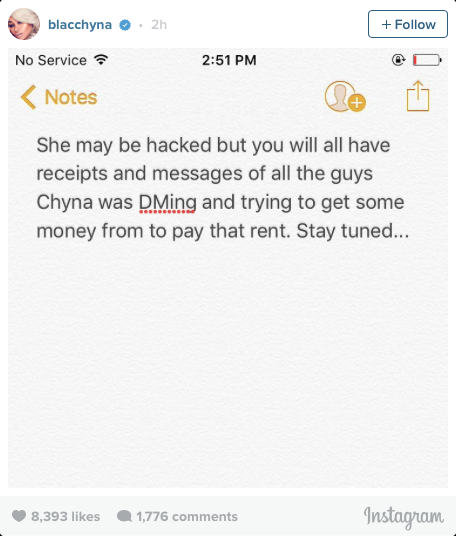 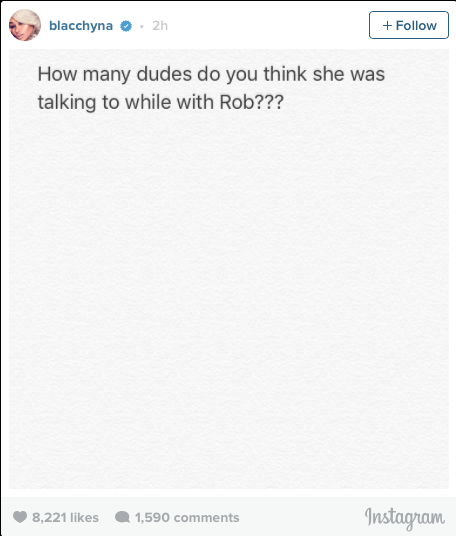 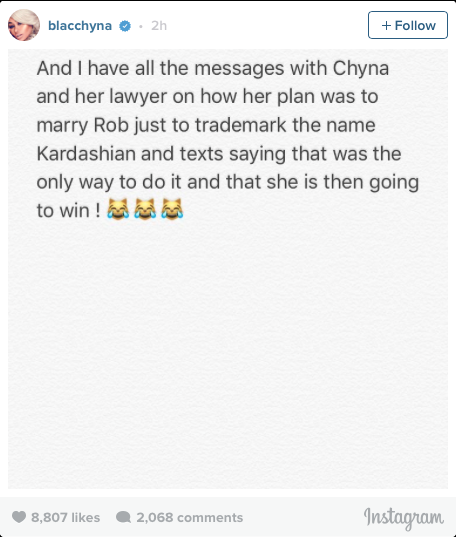 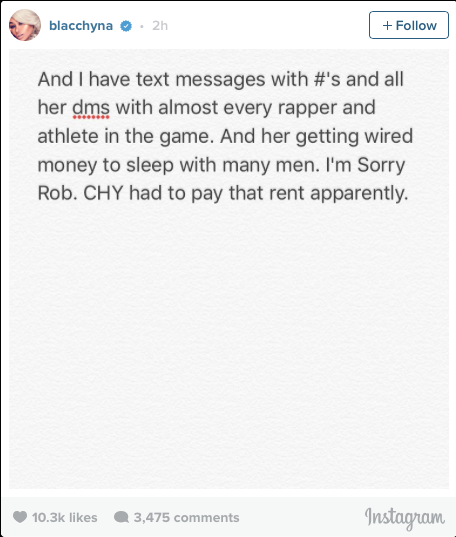 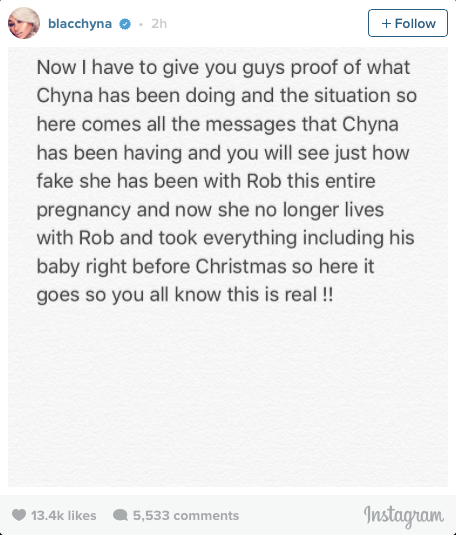 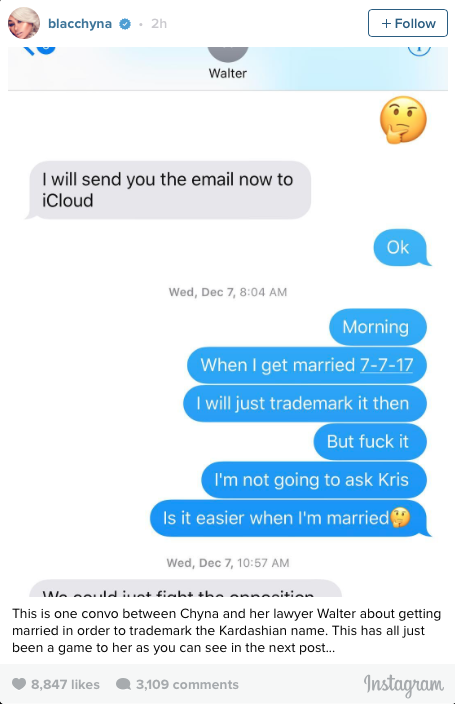 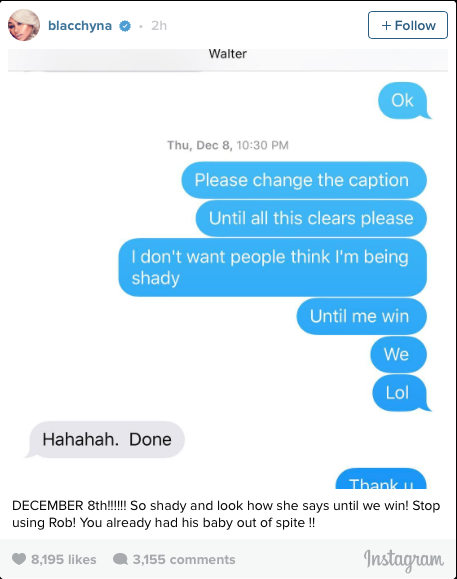 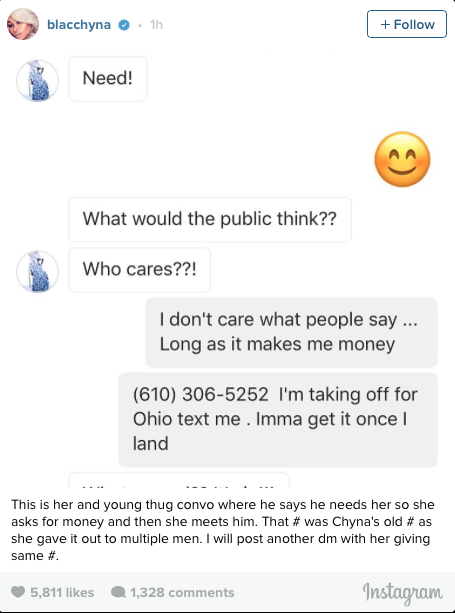 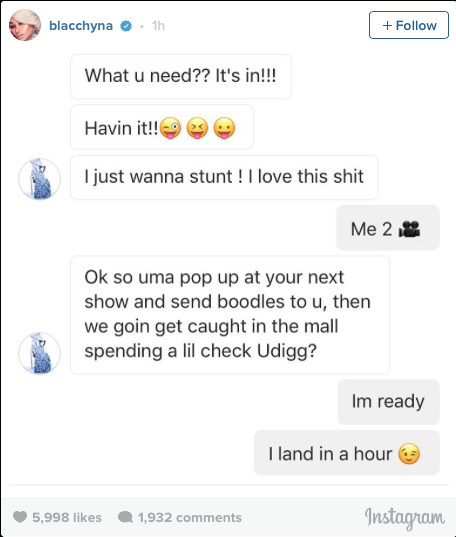 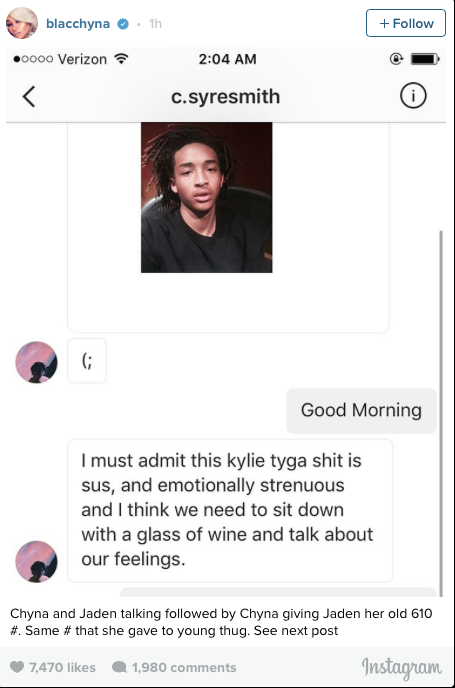 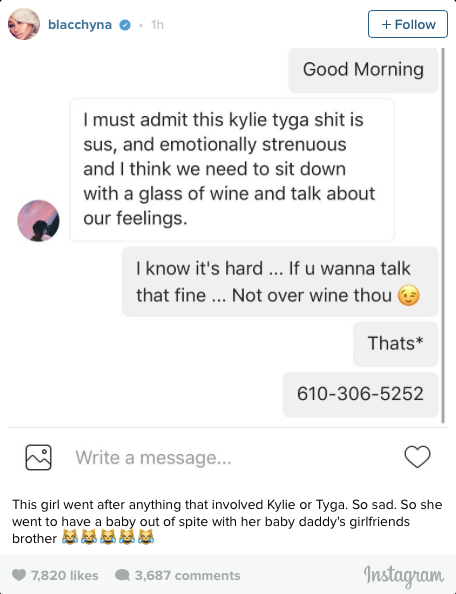 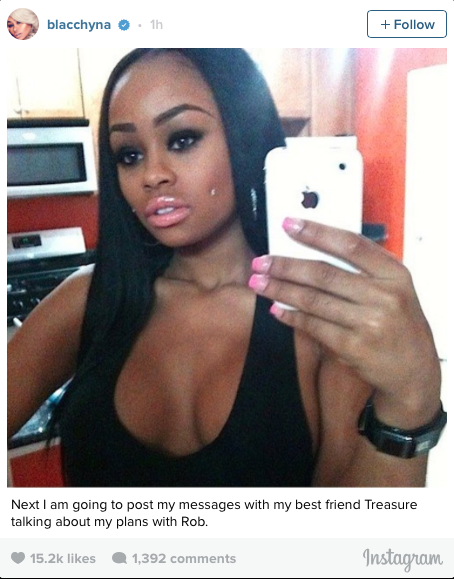 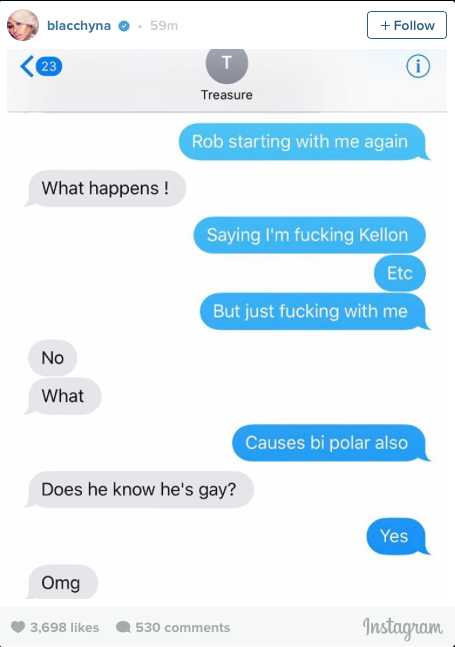 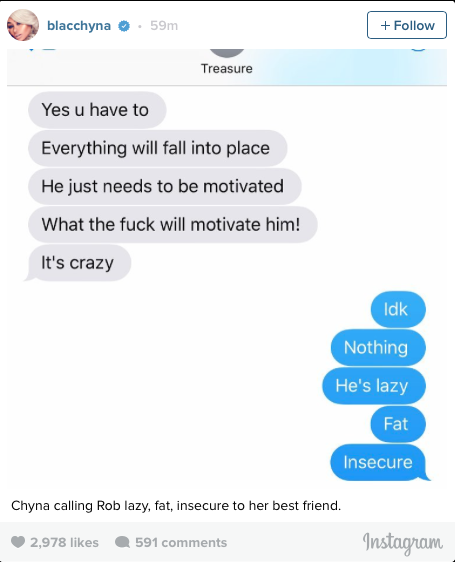 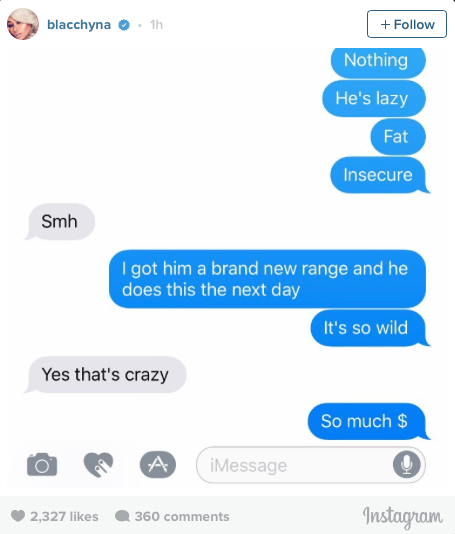 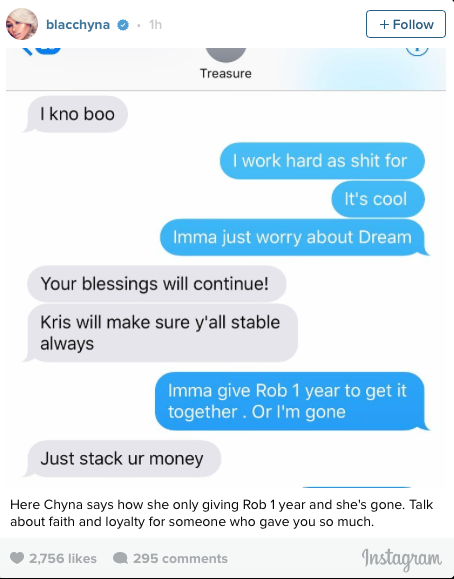 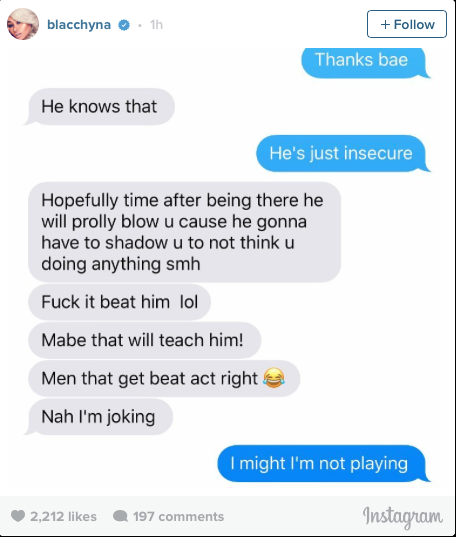 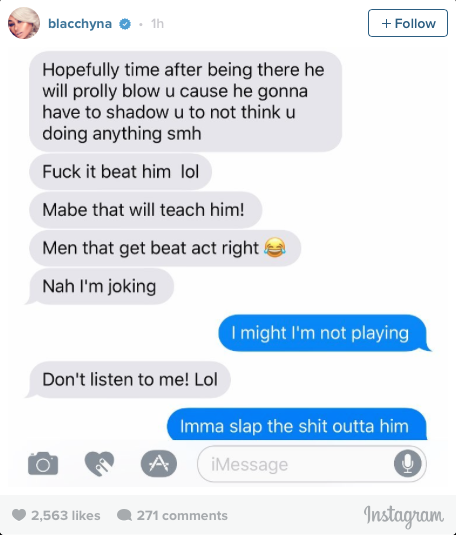 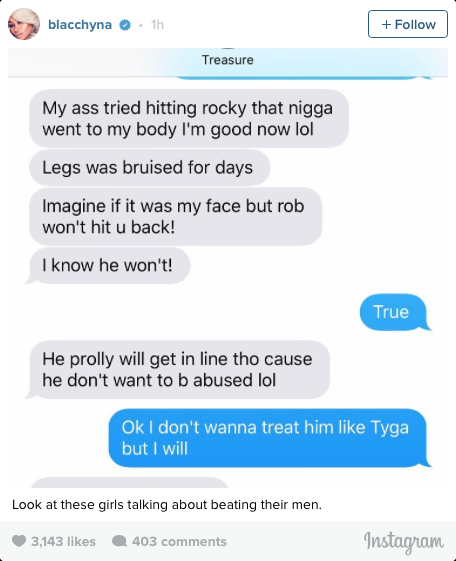 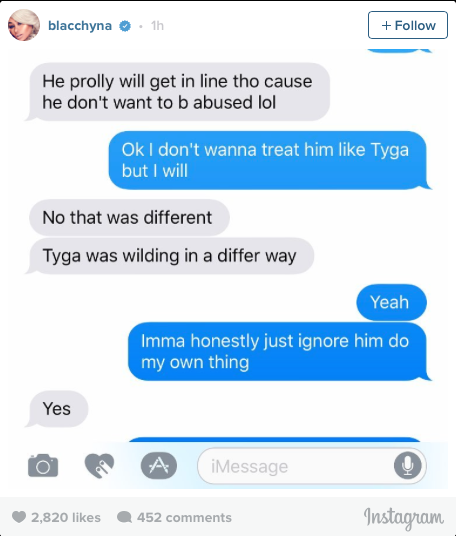 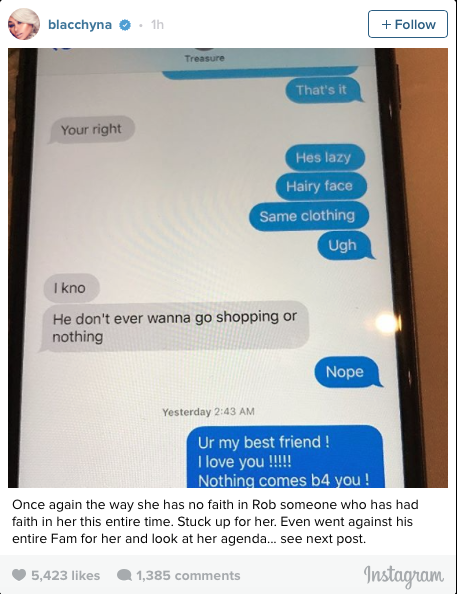 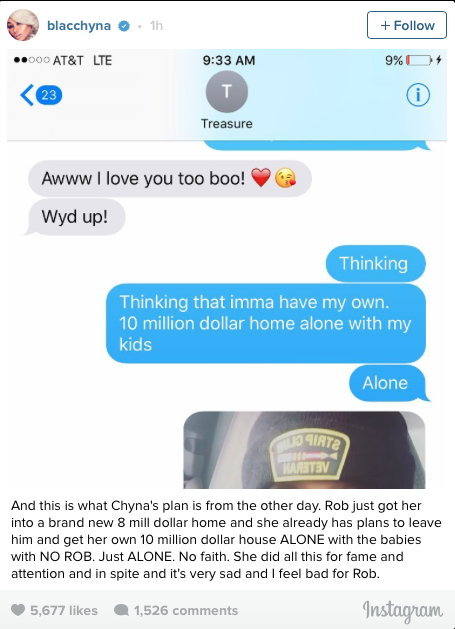 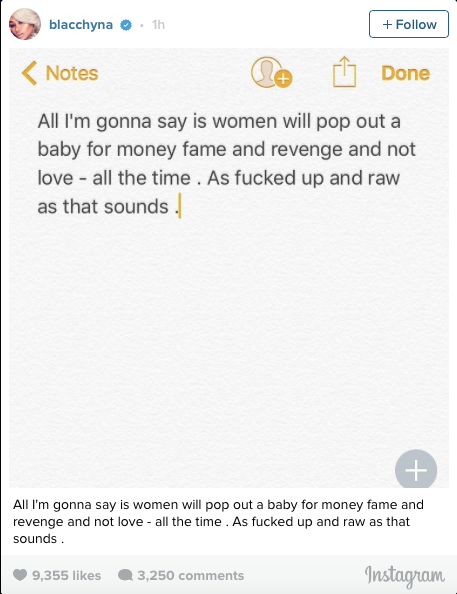 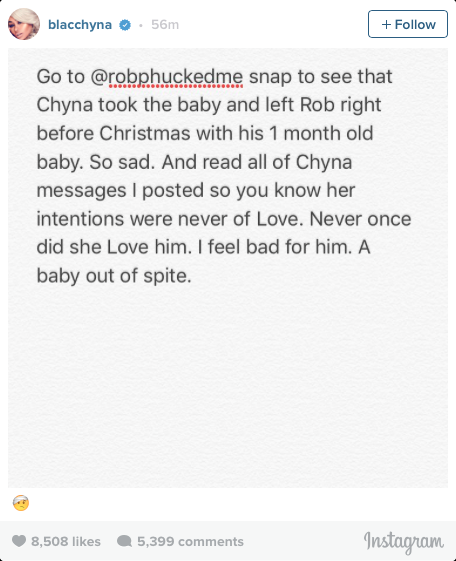 Watch Rob talked about his failed relationship below.