Blac Chyna announced to the world that she’s forgiven Tyga for leaving her for 17-year Kylie Jenner.

Its true. Well, so it seems.

After months of feuding with the Rack City rapper and Jenner, Chyna shared her thoughts about the situation with her Instagram followers. Chyna wrote, “Tyga I forvie you! Im over the drama.’ 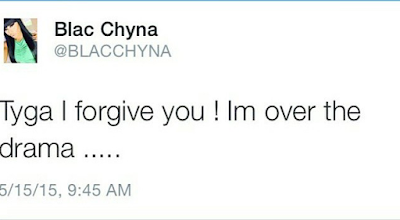 Chyna may have forgiven her baby daddy, but her mom is a different story. It seems her mom, Ms. Tokyo Toni, didn’t get the memo as she continued her earlier rant against the Kardashian family by calling Kris Jenner a “pimpstress,” the Kardashians “perverts,” and Tyga a “real jerk” in comments made on Instagram over the weekend.

After Blac Chyna’s mom heard that Kris and Bruce Jenner didn’t approve of Kylie’s relationship with Tyga because he was currently tied up in a custody battle with Blac Chyna, Ms. Tokyo Toni went after the reality family again.

Ms. Tokyo Toni wrote, “Now KRIS And her husband or wife Bruce Jenner no longer wants Kylie around Tiger due to a bad custody battle b!tch its your daughter … BE A MOTHER AND NOT Pimpstress!!!!!!!!! MOM MANAGER? Of what? SMMFH!!!! The bad part is she made the statement don’t mess with Tiger into the custody battle is over!! No b!tch you go ahead and marry him!!! CHYNA DONT WANT HIS BEGGING ASSSS!!!”

Ms. Toni continued her rant in the comments section. She wrote, “Thanks because this sh!t is real it doesn’t seem like it but it is. I never took his side or her aside from TMC to going to concerts with him because it was their business no one else’s no one sleep with them no one is in their house with them so no one knew or should know anyone’s business if you’re not in their home!! This guys a real jerk I don’t like him I never will like him again.

She continued, “I went on TMC to clear the air telling everyone that we are family no matter what I told them how man taiga got into it back-and-forth over this but yet he is still going to be my son-in-law and Kings father now I almost regret even saying his name out of my mouth knowing the envoy you disrespectful trifling trader that he is.”

Ms. Tokyo Toni began to publicly ridicule Tyga after it was reported that his grandmother approved of his relationship with Kylie because she came from a better family. She then proceeded to bash everyone in the family. Read her tirade below. 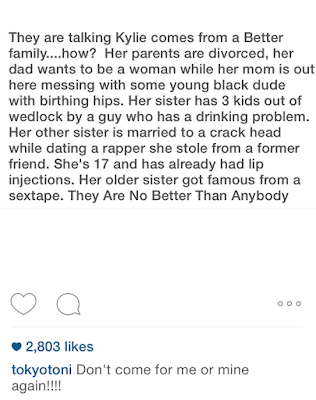 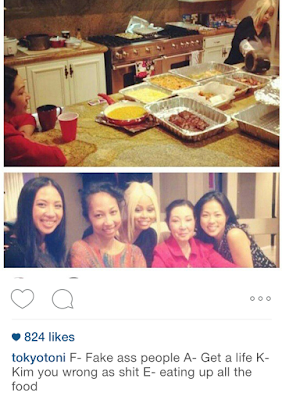 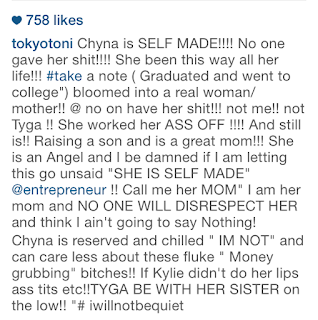 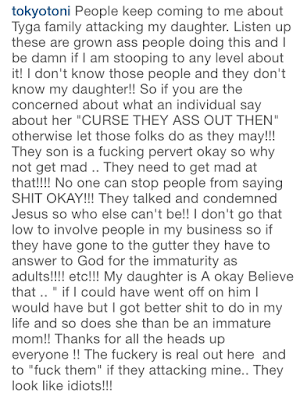 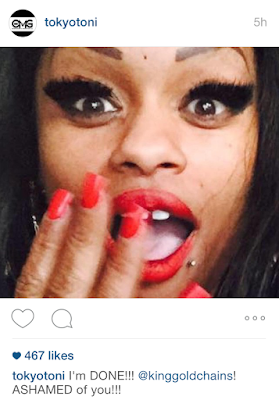 Although Toni seems to be preoccupied with Chyna’s love life, she’s also promoting her a listening party for new artists. Her event is scheduled for July 3 at Spice Lounge in the DMV hosted by Trina and Blac Chyna.