Mrs. Carter kept the crowd on their feet performing some of her biggest hits. But a few people weren’t happy that Beyoncé was in their city. Protesters set up shop outside The Mrs. Carter Show warning concert goers that Beyonce and Jay Z were possessed by demons.

The Washington Afro-American newspaper spoke with two protesters, Wade Montgomery and Rocky Twyman, who are founders of a group called Pray at the Pump. The group asks for, and they say receive, divine intervention in the price of gasoline.

“We believe that this couple is virtually destroying our youth,” Twyman told TheAfro.com. “If you go on the Internet, you’ll see stories about how they’re both part of the Illuminati and you can see Jay-Z’s use of the Satanic triangle symbol when he performs.” 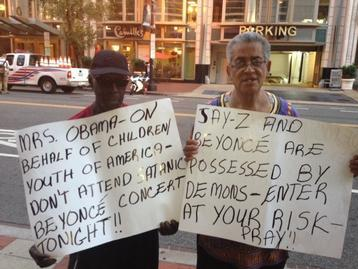 Twyman added, “Jay-Z even declared himself to be God by referring to himself as Jehovah, and we don’t think that this is the image that our young people need to be glorifying.”

The Afro reports youth around the Verizon Center mostly mocked the protesters. But Twyman told the newspaper he believed he’d gotten through to parents.

Tyman hopes his movement will catch on with protests in every city on the rest of the Mrs. Carter Show tour.

Watch a few performances from her DC show below.