Beanie Sigel is no longer a Meek Mill supporter.

Sigel admits that someone punched him because he admitted that he helped the Philly rapper write his diss lyrics. During a two-hour-long Tax Season podcast episode, Beans didn’t hold back when addressing Mill.

“Your fuckery is becoming transparent,” Sigel said. “You’re in a place where ni**as is saying you misrepresenting Philadelphia.”

But things were all good less than a month ago when Beans joined Mill and Omelly on their “Ooouuu’ diss aimed at The Game. Later, things got rocky with Mill after he claimed he helped write some of Nicki Minaj boyfriend’s lyrics.

“I didn’t write Omelly’s first verse,” Sigel said. “I didn’t write all of his second verse, but the majority of it. That’s facts. You ni**as is playing games, lying, saying I ain’t write that shit.”

However, after the song was released, Sigel and Mill fell out. “He started rambling,” Beanie said of Mill. “Talking about how I’m broke…and he could put a bag…and I clicked. I didn’t wanna hear that. You gon’ put a bag on who? You know what? It ain’t no more rap.”

Although Game called Sigel a ‘Crackhead’ and everything else under the book. The two still managed to make peace. But not with Mill, Teefy Bey, who is a member of Mill’s Dreamchasers crew, said he knocked Mac out.

“Boy didn’t wanna do that, man,” Sigel said. “Sometimes you just get caught up in the momentum, man. But you don’t get no props for that though, cuz. You stole me. Your big-ass put me down too. You ain’t knock me out ’cause ain’t nobody helped me up but you put me down and I seen them flashes, but it was from the blind side. You had ample opportunity in my face. We know what’s real.” Check out excerpts from Sigel’s opinion about Mill and Drake feud.

On Drake: “Drake don’t gotta live by the rules we live by or you claim to live by,” he added. “He’s not a street ni**a…He don’t gotta live by that code. You can’t look at that man in a different light because he’s got armed security or whoever he got. He’s the fucking biggest thing in music, ni**a. A pop star.”

On Drake beef: “What’s the real reason why you was mad at Drake?” Sigel poised to the question on his episode of Tax Season. “In my point of view, you was laying in the bed one night, you rolled over and you looked at her cuz, and you asked her, ‘You fuck that nigga?’ And she ain’t answer you in the way you wanted to. That’s what I think. I don’t know, I don’t know. But that’s my POV of it. And believe that’s the majority of everybody’s POV of it. ‘Cause who cares? Where’d that beef come out? What point you gain from coming at that man like that? None.”

“No disrespect to Drake but you took a loss to a singer from Canada, at that. You flying off the handle. You should’ve left it alone and took the advice I gave you when you went through it the first time…I strictly told you, ‘Don’t say nothing, Meek. There’s power in silence.’”

On Nicki Minaj: “He made a statement to me — I ain’t gonna put his statement out there — about him and his relationship with his woman. I ain’t gonna put that out, but he made a statement to me that he shouldn’t have. I told him this, ‘Off that, let’s get to some man shit. At the end of the day, Meek, you shouldn’t have told me that because what go on under your roof supposed to stay under there, especially with you and your woman. Now we on man time.’”

On his relationship advice to Meek: “Them broads will drag you. If you don’t come in the door strong, you gotta come in strong from the door. They’ll drag you, especially a chick who don’t need you, especially a broad who got a bankroll. That’s like the ni**a who come home from jail, that get with the bitch on Section 8 and he eating up all her kids’ cereal ’cause she get WIC. He drinking up all her juicy juice. But you under her roof ’cause you don’t got…At the end of the day, you living by her rules. She can tell you, ‘Get the fuck outta here. I don’t need you.’”

On Meek Mill’s street stamp: “Meek, you gotta prove yourself to yourself. You don’t have a stamp in the street at all.”

Mill responded by sharing a text message, which was allegedly from Sigel. 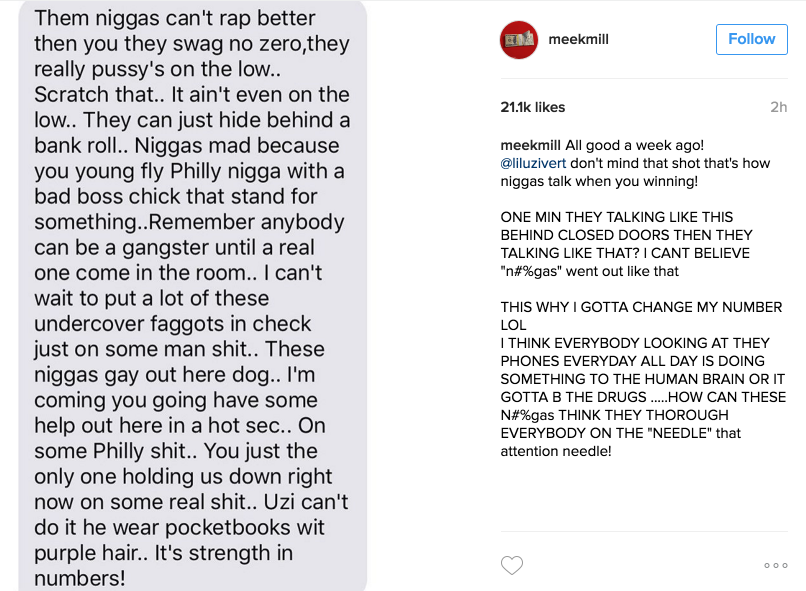 This beef doesn’t seem to be ending anytime soon.