Basketball Wives has been under heavy scrutiny for its ongoing fights and bullying this season.

And episode 13 of the VH1 reality show didn’t help the situation but it actually made it worse. Tami Roman had plenty of fans of the show up in arms when they saw her confrontation with new cast member Kesha Nichols.

During a group trip to Tahiti, Tami drank a few shots of heavy liquor before she confronted Nichols about her gossiping. A stunned Nichols appeared defenseless as Roman proceeded to stare her down as the other cast mates nervously looked on.

Nichols was so frightened by the exchange of words that she left her purse and cellphone. Tami, who appeared with blood-shot eyes, took her purse hostage and refused to give it back to the professional dancer until she received an apology.

Tami’s verbal abuse was so severe that she had cast member Evelyn Lozada in tears. Nichols eventually got her purse back and she chose to leave and return to the state after less than 48 hours on the island.

“I don’t apologize for it 2b accepted – that is ultimately the other person’s right to accept or deny it. My only responsibility is to acknowledge a mistake was made and own up to it. I apologize to my family, my REAL friends, my business colleagues, and my Project Girl ladies 4my recent behavior on BBW. I am NOT a bully as depicted on the show, but I did make poor decisions in handling my differences with my cast mate. I sincerely apologize to all of us, as well as to my castmate who was on the receiving end of my wrath.” 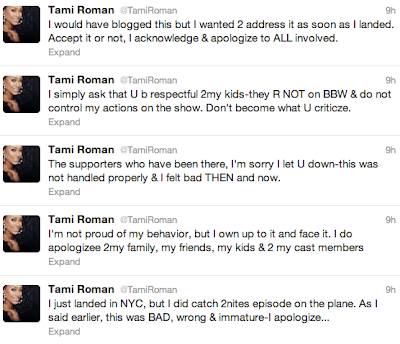 Nichols believes she was the victim of bullying in that particular incident. She wrote on her personal blog, “What I experienced was extremely difficult and emotional for me, as I’m sure it is for all victims of bullying. Unfortunately, I had to relive my personal experience by watching it happen on national television. At the same time, I now have a platform to bring awareness to the issue of adult bullying in today’s society.”

Nichols claims Tami and her are on good terms now. She told Sister2Sister magazine, “After Tami’s health scare, whatever drama was going on between us was out the window…I sent her an email telling her I hoped for a speedy recovery and was praying for her, and that’s the last I heard of it.”

Tami and Evelyn needs their ass whooped, that’s all. The right cast member has not joined the show yet to do it. But when it does happen the bullying will stop.