Basketball Wives LA star Draya Michele is off the market.

“He told me to dress casual and we ended up going to where we had our first date,” Draya told told People. “He was acting so weird and so nervous. When he walked up to the bar he tripped and fell over some chairs! I was thinking ‘What in the world is wrong with him?'” 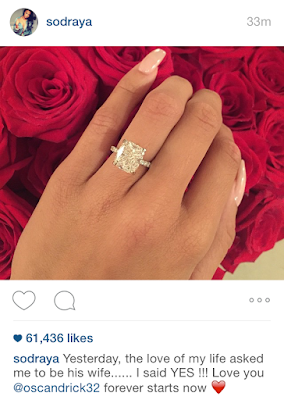 Once Scandrick he got down on one knee, Draya realized what was happening. She claims she began hysterically laughing and crying at the same time.

The Cowboy star gave Draya a cushion-cut diamond weighing in at a little over 6 carats, designed by Jasons of Beverly Hills. “It’s more than beautiful,” she said, “more than I expected.”

This engagement comes on the heels of a split that the two announced in May.

“I knew I was going to say yes to him whether he asked me now or four months ago,’ Draya said. “He’s the first man to make me want to be different and be mature.”

Draya gave little details on the wedding planning. The reality star claims she’s in “no rush” and is “going to soak this time in and have fun!”