Basketball Wives LA stars Brooke Bailey and Bambi Adiz were at odds when season two of the show began.

The reality stars had bad blood over a man allegedly named Harold Porter, who they nicknamed ‘Black Santa’ on the reunion show. Brooke was the man’s girlfriend and Bambi was the side chick. Both believed the other was mad because they were both dating the same guy at the same time.

But as it turns out, Brooke didn’t have any bad blood against Bambi. They both agreed that ‘Black Santa’ was pretty much a trick and he gave good gifts.

But despite what Brooke and Bambi said, ‘Black Santa’ has come forward to defend himself. He wrote an open letter to Jackie Jasper of DiaryofAHollywoodStreetKing.com and called both of the women liars. He insists he’s no dope boy. Read the open letter below.

First off, I’d like to state that I did not sign up for Basketball Wives LA. I was not a cast member, but somehow I have been made an unwilling participant in the Bambi/Brooke drama. I don’t owe the fans (of BBWLA) any response, but I would like to clear a few things up since it seems the truth has been stretched too far. Here are the facts…

1. I respect Brooke for trying to handle the situation with class, and not make the story or Bambi too relevant on the show, but she should’ve just told it like it was. Years ago, I dated Brooke, and was serious about her. Bambi was just a toss she found out about.

2. “Street dope boy”? NO!!!! I’ve been a private investor since 2004 on 4 existing businesses and multiple start-ups. I help people build or save their dreams. In 8 short years I’ve been blessed to have grown to where I am now. Yes, I’m a hustler, in the business world, and my money is clean. Not all money is Hollywood money, or drug money people. Grow up.

3. I am NOT a trick. I’m a real nigga like any other real nigga out here that works hard for the people I love. My lady represents me, and if she’s holding me down there’s nothing ima get for myself, that I won’t get for her too. Brooke was my lady, Bambi was not. If Bambi thinks the crumbs I threw her are worth bragging and creating a whole reality show story about, it just confirms the type of chick she is. Trash!

4. Brooke and I threw a big party. We flew all of Brooke’s friends in 1st class to host. We put them up in the Ritz Carlton, gave them their own VIP section with bottles. Bambi and her homegirl were also flown in, Coach. I put them at the Comfort Inn and stashed them in another section with my boys and gave them A bottle to share. FACTS. Was I wrong for having a toss at the same party as my lady? Yeah, Because I think Bambi saw the difference in how I treated her.That’s what kicked off this one-way drama between her and Brooke

5. Bambi took pictures with Brooke at the party and posted them online. I don’t know if she did it as a fan, to be funny, or to get under my skin. But she did it.

6. When Brooke hit up Bambi and found out she was my slide, Bambi hit me and asked me to change her name in my phone so she could keep talking to me. Niggas know, that is a sign she was a professional toss. NO main chick even thinks to do something like that.

7. I don’t know Malaysia. Never even met the chick. Her asking Brooke about my whereabouts was confusing and strange to me.

8. I’m flattered but also a bit offended at this “Black Santa” shit. Anyone who really knows me knows I have high standards and priorities. If I fucked with Bambi like that her, Black Santa’s first “present” would’ve been some porcelain veneers, then a better wardrobe. I wouldn’t even let an ex-lady of mine walk around like that.

9. If Bambi was looking for a “Black Santa” to upgrade her shoe game and invest in her music career, she DID NOT find that in me. I wife women that are already used to a certain level of luxury and are already established or investing in their own shit. Fly women that are gonna motivate me to go get it and share it with them. I don’t save or rescue ho ho hoes.

10. Bambi says she didn’t sleep with me. This is true. Well, actually, ”I didn’t sleep with her” would be more accurate wording. And once you peep the pic of her p*ssy she sent me (attached) you’ll see why. Garbage! Go here to see nude photo.

There it is. It’s not my intention to expose that girl but she should have never misrepresented her position with me to gain fame on reality TV. I hope this brings some clarity and closure to this exaggerated ass story. But if I’m going to be labeled Black Santa, here are some gifts for you all.

Bambi denied on Twitter that the naked photos are of her. 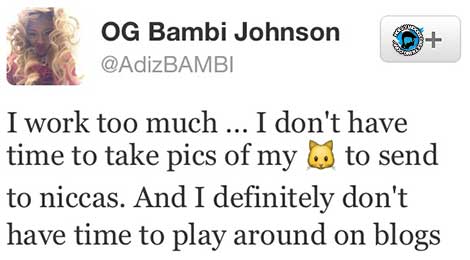 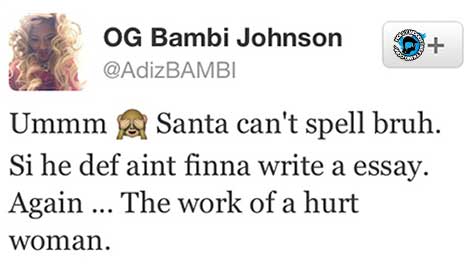