But that hasn’t stopped the reality star from allegedly creeping on her husband. Nunn, who is married to Jacob Payne, was spotted having dinner with Washington Wizards star John Wall at Crustacean’s in Beverly Hills.

Nunn, who gained fame as one of the housemates on Oxygen’s fourth season of the Bad Girls Club, wore a fitted dress to dinner while Wall wore a cap and kept his hoodie on the entire time. 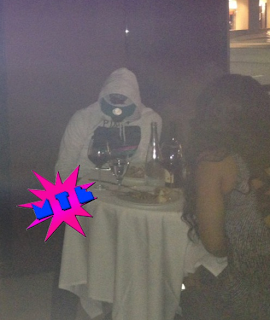 Our MTE spies spotted Natalie Nunn on Wednesday, June 12th, dressed to get sexed in a tight “Kelly Bundy” type fitted dress having dinner with John Wall, who was looking incognito at Crustacean’s in Beverly Hills…

They say the two were seated in the cut having dinner and conversation. Making sure they were not seen, they walked in separately. They were seated near the front but off to the side.

Our MTE spy also said what they didn’t notice was a ring claiming residence on Natalie’s left hand.

Nunn’s husband is currently playing football in Brazil. The two appear to be on good terms because he posted a conversation between the two on Twitteron June .

If rumors are true, she will have plenty of explaining to do to her husband, who she married in May of last year.

Photo via Mouth to Ears