Azealia Banks is no stranger to beefs in the music industry.

While Banks is trying to make a household name with her music, she’s continues to gain headlines for her battles with artists. On Sunday, Banks took aim at Rita Ora while the two are currently on tour in Australia as a part of the Future Music Festival.

Banks began her rant on Twitter with the tweet,”Lol Rita Ora is so thirsty. She climbed over the wall of my dancers dressing room to snap photos. She’s been TRYING IT on this tour man…” She’s mad she’s Rihanna’s understudy.”

TI Says Azealia Banks Is On Some B-tch Sh-t, Banks Says He’s a Snitch and Clown!

Banks didn’t stop there. She continued her attack with,”Ever since I arrived on this tour Rita’s been going out of her way to try and intimidate me. Taking all these candid of me when I wasn’t looking, then posting and deleting them like a weak bitch.”

Ora didn’t respond on Twitter. She opted to send Banks a text message that she decided to share with her followers. Azaealia posted a screen shot (below) of the text to Instagram with the caption: “Shut up Ria Oral.” 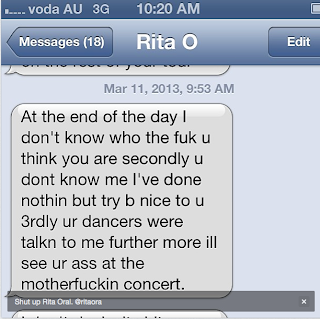 We’re guessing these two won’t be hanging out anytime soon.
Photo via GlobalGrind