Ashanti has read her fair share of negative comments about her music on social media.

The Braveheart singer usually ignores the negativity, but one person got under her skin on Sunday. So much so, that she accused him of being gay and called him out of his name.

Ashanti And DeSean Jackson Spotted Together, Opens Up About Relationship With Nelly

Sure, Ashanti could have taken the high road, but the guy deserved it. Read the exchange between Ashanti and the man with the Twitter name ‘Raymond Black’ below. 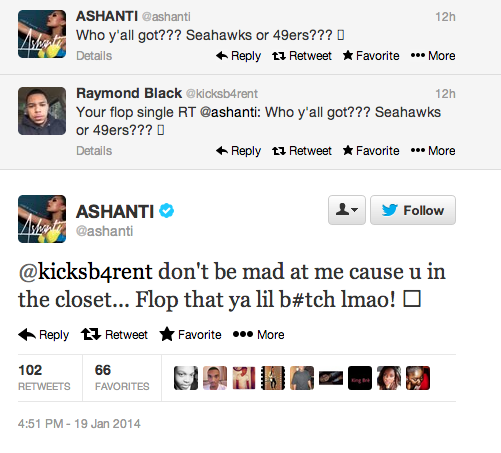 Ashanti 1, Raymond Black 0!
Meanwhile, Ashanti showed off her figure on Instagram, posting photos of her in a bikini while in Miami. Ashanti posted the photos above with the caption: “There’s just something about a woman who’s comfortable in her own skin.. #braveheart2014 #igotit#miaminights”