AP.9 wants a few extra minutes added to his 15 minutes of fame.

AP.9 catapulted into the spotlight when photos leaked of the rapper and Ice-T’s wife Coco Austin hugging and squeezing on each other at a club in Las Vegas. Many assumed the two hooked up, but Coco denied the claims. She alleges AP.9 was simply a super fan who showed up to all her events.

AP.9 claims that wasn’t the case. He reveals to Star Magazine that the two had unprotected sex. 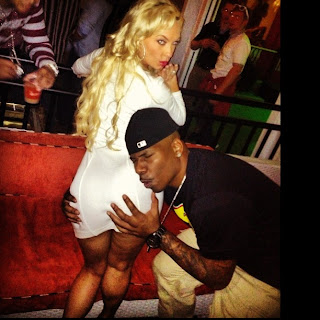 The rapper told the tabloid:

“I first met Coco at Surrender Nightclub. She invited me to her table; I had a couple of drinks; we exchanged numbers. I could tell we had a physical attraction. She asked me, ‘What are you doing after the club?’ I said, ‘I’m probably just going to get a room and stay right here.’ She said, ‘Well, I’m going with you.’

We had sex. I don’t know who made the first move. It wasn’t making love; it was just sex. We had sex unprotected. I really hope she isn’t pregnant!

She did an interview and said, ‘Oh, he was a superfan, everywhere I went he showed up and ran up to me talking pictures. She threw me under the bus like I was some groupie stalking her.

Ice-T called me and said, ‘My wife wouldn’t f**k with you. You need to tell the truth because my wife wouldn’t do that.’ So I told Ice-T: ‘You want the truth? OK. Me and your wife had sex!’ I got respect for Ice, and I’m not mad at her. But don’t lie about me. Everyone is looking at me like I’m the bad guy.

Publicist Kali Bowyer told RumorFix that AP.9 is trying to sell a sex tape of the two for $100,000. She said the rapper told her the tape “has various pics, audio and footage of him placing his hand into her private parts, acts of oral sex, doggy style positions with miscellaneous graphic exploits and sexual conduct.”