Angela Stanton Not Scared of Lawsuit, Calls Out Phaedra Parks on Twitter [Details]

Angela Stanton is not backing down from her claims that Real Housewives of Atlanta star Phaedra Parks was allegedly involved in a life of crime, guilty of theft, racketeering, and forgery.

In her book Lies of a Real Housewife: Tell the Truth and Shame the Devil, Stanton details how Phaedra and her husband Apollo Nida allegedly introduced her into their inner circle of criminals, and left her out to dry when she was arrested.

Parks denied the allegations and filed a $30 million dollar suit in May against Vibe Holdings, which operates Vibe.com, Uptown Magazine, and Augustus Publishing after the company published a story and video where Stanton detailed the alleged crimes.

Angela Stanton Laughs At Phaedra Parks $30 Million Lawsuit Against Vibe, Says She Was Telling the Truth

Stanton, who was not mentioned in the suit, hasn’t stopped lobbing even more accusations against Parks. She now alleges that Parks was a madame. Check out her tweets below. 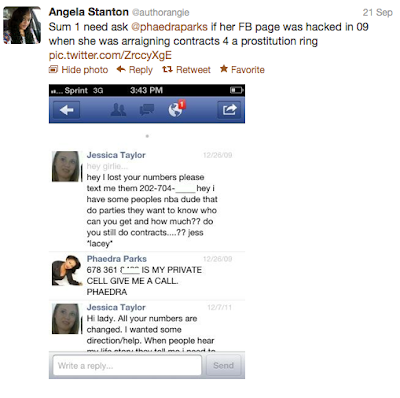 According to Courthouse News Service, Phaedra’s suit/complaint alleges that Vibe.com “had actual knowledge that the accusations against plaintiff were false prior to publication.”

After listing Phaedra’s multiple charitable and community involvements, the complaint states that Parks met Stanton in 2000 when she represented Angela’s then-boyfriend Drama. Parks later represented Angela in a sentence-modification hearing, but “plaintiff has never had any formal or informal employment relationship with Stanton.”

The document continues, “Plaintiff has never participated in any criminal activities with Stanton…Plaintiff did not socialize with Stanton on any regular basis and does not consider (and never has considered) her to be a close friend or confidant.”

If you missed Stanton’s interview with Vibe check out the videos below.