But clues about his love life has emerged the last few months. Red flags went up in March when Cohen posted photos of himself and retired NHL star Sean Avery. The unlikely pair spent the weekend together in Miami for Ultra, the DJ music festival.

Cohen posted photos on Twitter with the caption: “Celebrating our one year anniversary at #Ultra @imseanavery #GetawayDate.” Later, the Bravo executive clarified that the two were just friends and celebrating their ‘bromance.’

Now reports are surfacing that the two have been dating for over a year. Someone from Avery’s camp allegedly emailed Fame Driven Spy about their relationship. Read below:

I’m not sure if you are aware or not but Andy Cohen has been dating former NHL star Sean Avery for almost a year and a half now, it will be two years in March. And get this, they are secretly ENGAGED! There have been rumors for years in the NHL league about Sean Avery’s sexuality, but he has always vehemently denied it, Sean even went as far as to “date” a beard girlfriend (Elisha Cuthbert), who he was never even remotely into, to cover up him receiving backlash from his NHL teammates and internally in the NHL for being gay. The NHL is a very manly macho sport and so many NHL athletes who are gay stay in the closet for fear of the internal backlash around the league. Andy is sprung over Sean, but the issue is that Sean Avery is not yet comfortable making their relationship public. Even though Sean is retired from the NHL he still doesn’t want the “gay” title attached to him especially after so many years he’s denied he was homosexual. Sean thinks that by having an openly gay relationship with another pubic figure such as Andy will give him the title of “NHL’s first openly gay athlete dating a BRAVO Executive” following him and people not notice him for anything else. Sean is openly gay/bisexual around close friends, but not to the public.

Every holiday the two vacation together and share the same hotel room. This labor day weekend the two are in the Southampton’s together. The two are trying to be very discreet, but they are definitely dating. They are also 12 years apart in age, Andy is 45 and Sean is 33. 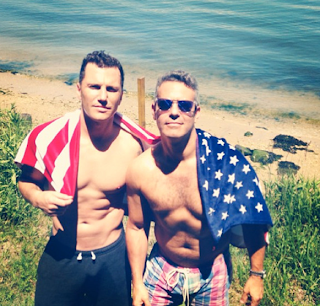 Cohen was asked by one of his Twitter followers if the engagement rumors were true. He did not confirm or deny.

Cohen is openly gay but Avery has lead a straight man’s lifestyle. He has been linked to model Rachel Hunter and actress Alisha Cuthbert.

While Cohen is known for his bubbly personality, Avery not so much. The retired hockey player enjoyed doing or saying something to get under the skin of opponents and their fans. He was often called the most hated player in the NHL.