Amber Rose is tired of waiting for her estranged husband to come home.

Rose admitted that she’s tired of waiting for Khalifa to come home. She said she has a ‘special’ relationship with Houston Rockets guard James Harden. She also talked about Tyga dating Kylie Jenner and Kim Kardashian with The Breakfast Club.

Read excerpts from her interview with The Breakfast Club below:

On Houston Rockets player James Harden being her “Bae” (15:41): “Me and James have a very “special” friendship for sure.”  She added, “I didn’t get the D yet. I’m not gon’ lie. But you know, Valentine’s Day is tomorrow. If he acts right…It is All-Star [Weekend].”

On Kim Kardashian:  Outside of her cheating with Kanye (which she says @11:47), Amber thinks Kim is fake and her selfies are contrived. Then she launches into a full-on impression of Kim talking a selfie of her bosom.

On Dwyane Wade (17:56): She said she’s not surprised that Dwyane Wade followed her (then unfollowed her) on Instagram because she posts pretty pictures. 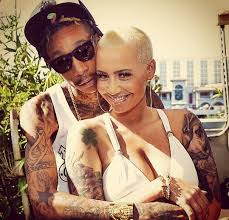 Read excerpts from Rose’s interview with Hot 97 below:

On the split with Wiz Khalifa:

I sat in the house and cried for 4 months. Every day. When I woke up. Went to bed. Cried and cried. Wiz was the love of my life and he broke my heart.

I waited for my husband. I’ve been waiting for him. He didn’t come home. So now, if I have a Valentine that’s a really nice guy that treats me nice, if I wanna get the D, I’ma get the D.

On calling her family “racist” during the OWN docuseries Light Girls:

On why she only dates celebs:

On being a role model:

“I have women, they come up to me and they cry….These girls really do feel repressed by their men, their families. They’re a mom. They can’t be sexy…They hafta wear a cardigan and be covered up”

On sex and bedroom skills:

On race and being bi-racial:

“I do not consider myself a black woman. Absolutely not….Bi-racial. I embrace everything that I am, I don’t feel like I’m more one thing, than the other.”

“I’ve seen the before and after photos that you’re referring to. And I’ll tell you, the before pictures — I was a buck, twenty (120). I’m a buck, sixty now (160)….I don’t have implants. My body is bigger….I did not get plastic surgery…It’s been two years. I’ve been tryna work on my body and do it the natural way.”

Why she twerked on Chris Brown at the club:

“Being petty cuz I was hurt over my husband.  My husband has been out with 50 different women, pulling sweaty white bitches out the club. And all these other girls. And not only was I in the house crying every day mourning my husband. I had to see that….And I’m in the house.”

Rose’s The Breakfast Club interview below.