Adrien Broner Accused Of Knocking Out Man, Robbing Him [Details]

Adrien Broner is in trouble with the law.

The junior welterweight world titleholder faces felony assault and aggravated robbery charges in his hometown of Cincinnati. Broner allegedly assaulted and robbed a man using a gun outside a Cincinnati bowling alley in the early-morning hours of Jan. 21 following high-stakes betting on bowling games, TMZ reports. Broner allegedly knocked the man unconscious and took money from his pocket before leaving the scene.

The news comes eight days before Broner is due to defend his 140-pound belt against Floyd Mayweather-promoted opponent Ashley Theophane in the main event of a Premier Boxing Champions card on Spike at the DC Armory in Washington, D.C., where Broner is training.

NBC reports that there are two warrants for Broner’s arrest regarding the incident. It is unclear whether the fight will go on as scheduled. A spokesman for Spike said the network was looking into the matter.

Bronner doesn’t seem concerned about the charges. He posted the conversation below. 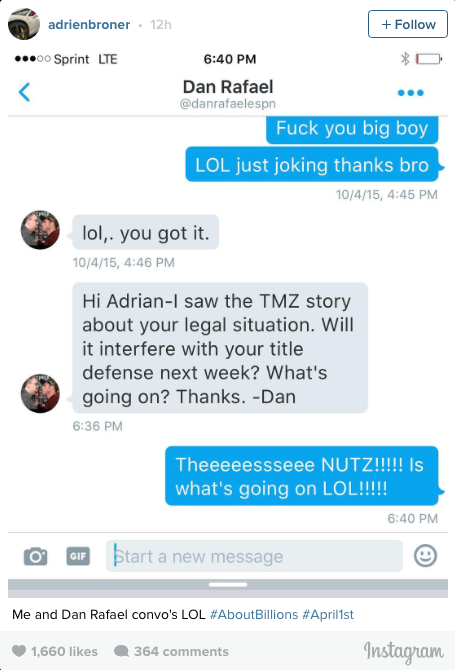 The alleged victim also filed a lawsuit against Broner two months ago.

According to the Cincinnati Enquirer, the suit filed in Hamilton County Common Pleas Court states Broner and the alleged victim, Christopher Carson, had been wagering as much as $6,000 per bowling match.

Carson had won $8,000 from Broner before the fighter ran out of cash, the lawsuit states. Broner then wagered another $6,000 on credit. Broner “became upset and left the bowling alley” when, after Carson had won a total of $14,000 and Broner sought a $6,000 bet for a final game, Carson declined.

The lawsuit states that Broner was waiting outside the bowling alley with a group of eight men when Carson left at about 3 a.m. Carson was punched twice by Broner, who had a gun in hand. The punches split his chin open and knocked him out. While Carson was unconscious, $12,000 in cash was taken from him.

“Adrien seems to have a penchant for walking around town and slugging people,” said Carson’s attorney, Chris Finney, according to the Enquirer. “We want it to stop.”

Broner (31-2, 23 KOs) claimed a vacant title by 12th-round knockout of Khabib Allakhverdiev on Oct. 3 in Cincinnati in a fight Broner dominated. He claimed a title in his fourth weight division.