The Queen Bee stunned fans over the weekend with new photos and a video that show her with much lighter skin. She even wore a blonde wig to cap off the shocking look. Fans are left both confused and concerned for the star.

Lil Kim unveiled her new look on Instagram with a series of selfies. She then went for the jugular to let her fans know it wasn’t just lighting with a video. She posted the selfies below with the caption: “Miami Heat.” 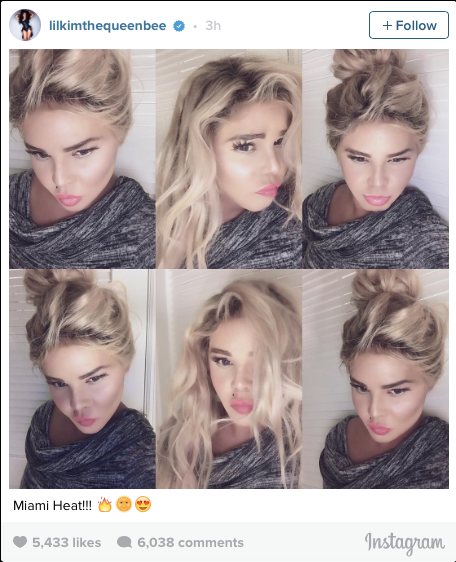 When Lil Kim rose to fame in te 90s her skin was much darker. Her features were quite different.

After the images emerged online, fans accused the 41-year old of bleaching her skin and getting more plastic surgery.

After all the responses to her pics, Lil’ Kim shared some flashback photos of herself with the late Notorious B.I.G., along with a not so nice message. “I was gonna post this pic for #SuckAD**kSaturday‼️ But #SuckAD**kSunday will have to do!” she wrote. “Happy Sunday! Me and my b**ch @cnvshaka the Gabbana Girls.”

In 2000, Lil’ Kim spoke to Newsweek about her appearance, admitting that she has a “low self-esteem” when it comes to her looks.

“Guys always cheated on me with women who were European-looking,” she told the magazine. “You know, the long-hair type. Really beautiful women that left me thinking, ‘How I can I compete with that?’ Being a regular black girl wasn’t good enough.”

Lil’ Kim also opened up about getting breast implants. “That surgery was the most pain I’ve ever been in in my life,” she said. “But people made such a big deal about it. White women get them every day. It was to make me look the way I wanted to look. It’s my body.”