It’s been rumored that Damon Dash’s ex-wife Rachel Roy was the reason Solange Knowles jumped on Jay Z in an elevator after the MET Gala in 2014.

Security footage leaked of Solange punch, kick and spit at Jay in an elevator as her sister Beyoncé looked on on May 5, 2014. Thereafter, many tabloids pointed to Roy as being the reason for the fight.

“Solange was defending Beyoncé in the elevator because Solange finds Jay’s friendship with Rachel to be WAY too close for comfort and it makes Solange very uncomfortable,” a source told Hollywood Life. “Beyoncé also confronted Rachel and said, ‘Don’t talk to my sister like that,’ after [Rachel] confronted Solange.”

Now fast forward to Sunday morning. Hours after Beyoncé premiered LEMONADE, Roy reignited the rumors by posting a photo on Instagram with the caption, “Good hair don’t care, but we will take good lighting, for selfies, or self truths, always.” 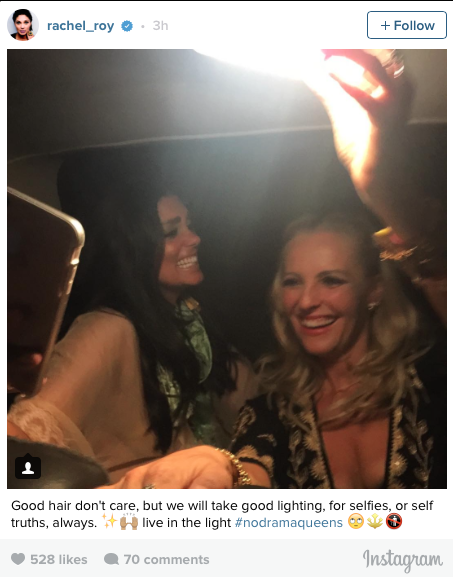 What makes this photo and comments telling is because during Beyoncé’s premiere she sings in one of her songs, “He only want me when I’m not there. He better call Becky with the good hair.”

It could be a coincidence that Roy mentioned ‘good hair’ hours after Beyoncé premiered it in a song, but seems fishy.