The Freebandz frontman alleges that Ciara is not allowing him to see their son baby Future. The Whera Ya At rapper went on a rant on social media dishing all the juicy details.

Future spilled the beans that he’s paying $15,000 a month in child support. But Ciara won’t budge on visits and is preventing him from seeing their one-and-a-half-year-old son. 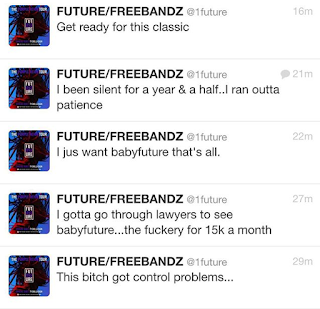 But is Future being truthful? Sources close to Ciara tell E! News that the singer has never stopped Future from seeing his son and that he does not and has not paid $15,000 in child support.

So why did Future go off? According to E!, he is jealous that Ciara has moved on (she is dating Seattle Seahawks quarterback Russell Wilson) and “that Future uses the situation to promote his music by staying in the press using her name.”

“Future has told her he hopes she fails in everything she does and that’s just being evil,” says the insider. “He is unable to move on and co-parent in a healthy way.”

According to TMZ, Future went off on social media because he planned a huge Christmas dinner and wanted all of his kids at the table. Ciara agreed at first but then changed her mind. He never saw his son and he got upset.

Sources told TMZ that Future and Ciara haven’t been on speaking terms for a year. They communicate through a family member, but now Ciara won’t deal with anyone on his side.

Future hoped Ciara’s relationship with Wilson would make the bitterness subside, but that hasn’t happened.

There are always three sides to every story. His, hers and the truth. There will probably be more drama between these two.