Bow Wow posted photos of himself partying and it backfired.

The CBS star posted photos with the mother of his daughter, Joie Chavis, smoking hookah and sipping tequila. It all appear innocent until fans began questioning why he was posting photos of his baby mama when he had a fiancée.

Mena took a jab at Bow Wow’s height. The former Love & Hip Hop New York star is much taller than the rapper when she wears heels.

It didn’t take long for Chavis to deny Mena’s claims. 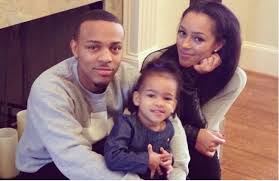