50 Cent Turned a Performance Into an Onstage Robbery [Video]

50 Cent performed some of his biggest hits, and reunited with G-Unit onstage at Ho7 97’s Summer Jam.

50’s appearance may have been the most talked about performance of the night at Metlife stadium in New Jersey. While he was performing, 50 allegedly had some of his entourage rob Slow from the group Slowbucks.

During 50 and Fabolous’s performance of Cuffin’ Season, a number of men snatched and grabbed at Slow. One man in a white t-shirt and Yankees hat comes up from the rucuss with a large chain in his hand before turning his back. That chain ended up on 50 Cent. 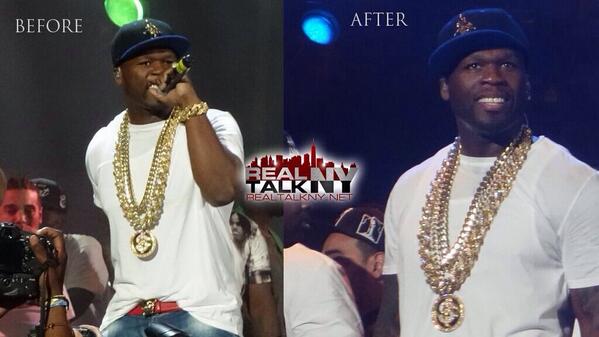 The fight allegedly stems from beef from last year.  50 and rapper Trav got into an argument during Meek Mill’s performance at the Mixshow Live Summit in Atlanta last year. Meek had to break it up and stop the two from going at it.

Trav, Slowbucks, Bucksy Luciano posted a photo on Instagram with 50’s son, Marquise. 50 commented on the photo,”This was a bad idea.”

Slowbucks removed the pic. But it’s still up on Trav’s page. Watch some of the rucuss below.