Rapper 50 Cent has never backed down from confrontation.

Just ask rappers Ja Rule, Fat Joe and Rick Ross. The New York rapper welcomes beef and he’s ready to fire back at any given time. So it came as no surprise when 50, whose real name is Curtis Jackson, got into a war of words with former boxer and Golden Boy president Oscar De La Hoya on Twitter about promoting.

50 Cent received a promoter’s license from the New York State Athletic Commission last week for his company TMT Promotions, which stands for ‘The Money Team.’ And now he’s poised to become Floyd Mayweather’s promoter when he’s released from jail on Aug. 3.

Mayweather entered the Clark County Detention Center in Las Vegas on June 1 for an 87-day sentence for domestic violence, but is being released early for good behavior. Mayweather had a fight-by-fight agreement with Golden Boy Promotions for all six of his bouts since 2007.

50 and De La Hoya’s Twitter war began over a comment the Golden Boy president made. Although the tweet wasn’t directed at 50 Cent, the rapper took it as a jab. Check out some of the tweets below. 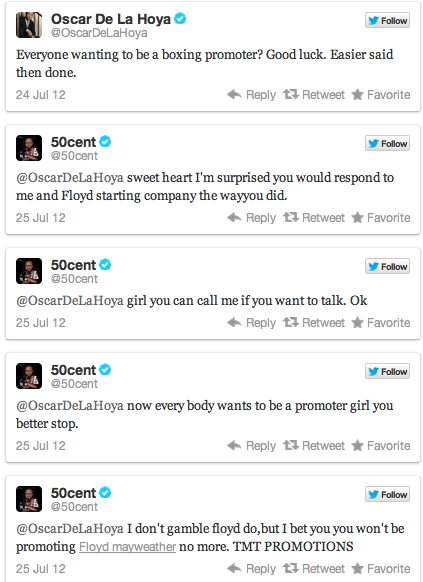 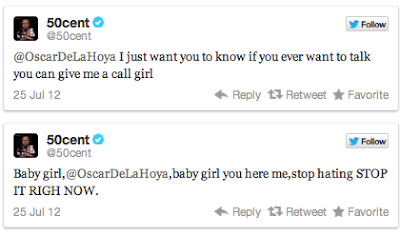