Then Hayes took his own life in a murder-suicide a their California home on Monday. Since their deaths, there have been several reports that claimed Hayes killed Moseley because she was having an affair with Trey Songz.

Songz never addressed the rumors but he did send out his condolences to Moseley on Twitter.

Although many didn’t see anything wrong with Songz message, 50 thought otherwise. He decided to blast the singer  for the way he gave his condolences.

Hayes was signed to Mayweather’s record label and was good friends with the boxing champion. According to TMZ, Mayweather was the last person Hayes called before he took his wife’s life and his own. 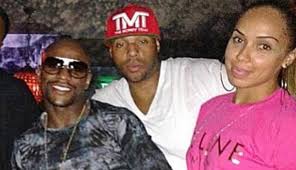 TMZ reports Mayweather said that Hayes called him on FaceTime Monday morning visibly upset and claiming that Moseley had been unfaithful. Hayes allegedly told the boxer that he was going to harm her, and though Mayweather tried to calm him down, it didn’t work.

Mayweather wouldn’t divulge what exactly he saw, but those close to him claim he was a witness to what occurred and heard everything and is being treated as a witness in the case. Mayweather is reportedly in shock over the murder-suicide.

50 Cent sent an olive-branch to Mayweather after he heard the news. He posted the photo above with the caption: “RIP Hayes, @floydmayweather you are my little brother. All can think about is what you said to me up stairs. Don’t you ever do nothing to your self no matter what champ. We can fall out and fight or what ever,but I don’t want to see you go out like that. #SMSAUDIO #POWER #FRIGO.”