There are some healthy foods that are just junk foods in disguise.

While many people have replaced sweets with so-called healthier foods it many not have been the best decision. As it turns out, some foods with healthy reputations are actually worse for your weight than the snacks in vending machines and corner stores.

TotalBeauty.com has put together the top five foods that are more fattening than a twinkie. Take a look at the list below. 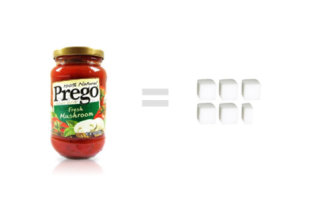 There’s a reason why that jar of Prego can taste as good as a home-cooked sauce from a nonna’s kitchen: It has sugar in it. Loads of it. To be precise, just 1/2 cup of Prego Fresh Mushroom Italian Sauce has 11 g of sugar — the same amount that’s in a glazed Krispy Kreme donut.

Eat this instead: If you read labels and compare brands, it is possible to find a sauce with no added sugar. Another alternative is to make your own spaghetti sauce from chopped canned tomatoes, olive oil, garlic, and a little dried basil. 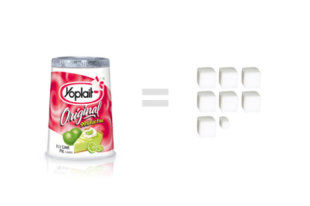 Yogurt might seem like the ultimate health food, but you’d be surprised by how some flavors, like the Key Lime Pie-flavored Yoplait, can be as sugar-loaded as an actual slice of pie. The Yoplait has 29 g of sugar — that’s the equivalent of 1 1/2 Twinkies! However, Ansel says, “It’s worth noting that about 12 g [of sugar] is from lactose, the natural sugar found in milk. Naturally occurring sugars like this aren’t nearly as much of a concern as added sugars because they come packaged with a bundle of nutrients. What you really want to watch out for is added sugars.” And yogurt — especially those with fruit on the bottom — is typically loaded with added sugars.

Eat this instead: Sweeten plain Greek yogurt with a drizzle of honey and some fresh berries or sliced bananas. 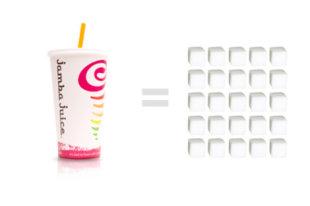 When I was in college, I would treat myself to a 16-oz. White Gummy Bear at Jamba Juice. The best part about it was that it felt like I was slurping a dessert but thought I was getting all kinds of healthy fruits. But in this particular smoothie, there’s sugar and four scoops of ice cream that get mixed in with the fruit, which ultimately amount to 540 calories and, depending on the size, anywhere from 40 to 110 g of sugar.

Eat this instead: Make your own smoothies at home, says Joy Dubost, American Dietetic Association Spokesperson, PhD, RD, CSSD. You’ll get all the nutrients of the fruits without the added sugar. 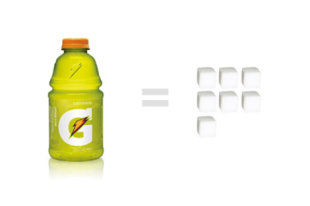 Even if it’s labeled vitamin water, an energy drink, or a sports drink, it can still be loaded with empty, sugar-filled calories. For example, sports drinks like Gatorade have 28 g of sugar per 20-ounce bottle. Dubost says that if you want to cut calories from your diet, skipping sugary beverages is an easy way to do it.

“I think there’s a place for sports drinks, but it’s for those who are extremely active and have sweated out their nutrients,” she says. “If you’re working out for more than an hour a day, then you can have a sports drink to replenish what you’ve lost,” says Dubost.

Drink this instead: Water. I know it’s not as flashy as a flavored drink, but I also know those empty grams of sugar and calories are not worth it. And no, water does not include vitamin water. A 20-ounce Glaceau Vitamin Water has 32 g of sugar. But what about the vitamins? If you have a well-balanced diet, you don’t need your vitamins to come from a bottle, says Dubost. 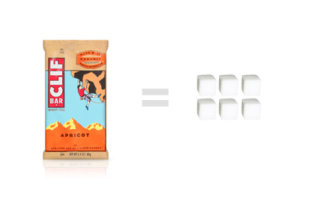 When you’re on a health kick and decide to spend your Saturday morning hiking instead of sleeping in, the No. 1 snack that gets tossed into your backpack is a granola bar, right? Sitting on top of that mountain with the sun shining and sweat beading off your face gets even better when you bite into that satisfying snack. Yet that “healthy” bar isn’t as good for you as you might think.

Eat this instead: Reach for a graham cracker with some all natural peanut butter.