The London 2012 Olympic opening ceremony was a celebration of British film, TV and music at Olympic Park in Stratford London.

Oscar-winning Slumdog Millionaire director Danny Boyle was the mastermind behind the show. It was an extravagant celebration to open the Olympic Games that will take place over 17 days with more than 16,000 athletes from 204 countries that are expected to compete.

One of the most memorable moments featured Queen Elizabeth, 86, in a funny pre-taped video with actor Daniel Craig as James Bond. In the clip, Craig escorts the Queen from Buckingham Palace into a helicopter, which flies to the stadium. The duo then parachutes into the Olympic stadium (they were body doubles, of course). The Queen and Prince Philip then appears and are introduced in the stadium. 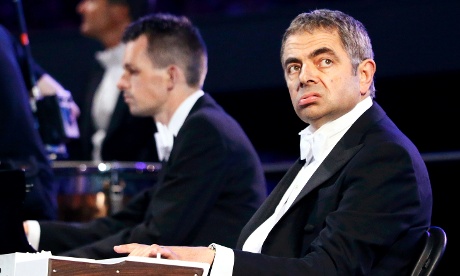 Soccer star David Beckham driving the Olympic torch by speedboat to the stadium.

The Parade of Nations, of course, and Paul McCartney closing the ceremony with renditions of “The End” and “Hey Jude.” A huge firework display capped off the event.

Check out photos from the event and a few athletes photos Some of the USA basketball team Check out the Queen’s skit with James Bond below.