Mr. Comme des Garçons is in the midst of the America’s Most Wanted Tour with T.I. and Lil Wayne. But that hasn’t stopped him from performing at other gigs in an effort to promote his upcoming album, B.O.A.T.S. II.

2 Chainz  and Pharrell took over the outdoor stage in Hollywood on Thursday to perform his single Feds Watching. The Atlanta rapper wore a white outfit while Pharrell rocked cut off jeans, button down shirt, sweater and straw hat. 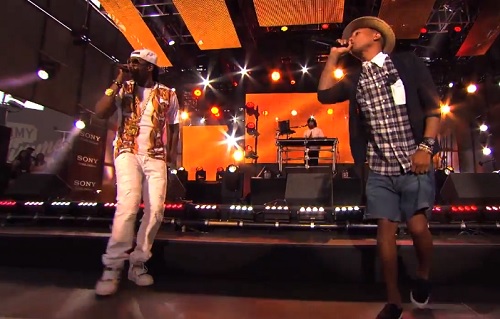 2 Chainz’ sophomore album B.O.A.T.S. II #MEtime will hit stores on Tuesday. There will be appearances from Fergie, Drake, Lil Wayne, Ma$e, and Pusha T to name a few.

Photos via Zimbio.com and Vibe.com