12 Salads Worse Than a Big Mac

There are plenty of ingredients that can turn a good salad bad.

Some salads are low in fats and calories, but if you don’t watch it adding too many wrong ingredients can make it unhealthy. Some restaurants try to lure health conscious consumers with its salad menu but don’t be fooled. Some salads have more sodium, fat and calories than other foods on the menu.

Yahoo Shine got Nicolette Pace, a registered dietitian at Nutrisource, Inc., a medical nutrition and weight loss center in Great Neck, NY, to describe 12 salads found at fast food and restaurant chains that are actually worse, health-wise, than a Big Mac.

McDonald’s legendary burger has about 550 calories, 10g saturated fat, and 1000mg sodium. Check out her list of fattening salads below. 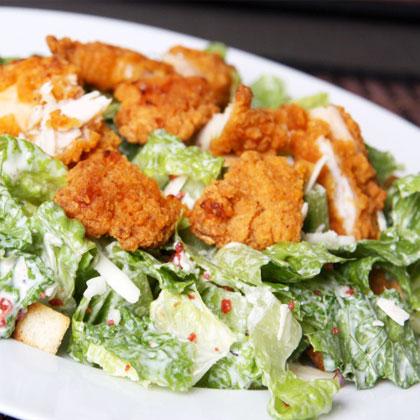 Why it’s Worse: Even before you add the salad dressing, which can clock in at 200 calories, this type of salad can easily reach 900-1000 calories due to the “crispy” (read: fried) chicken pieces. Add the creamy, cheese-packed dressing and the saturated fat can easily exceed 12 grams. 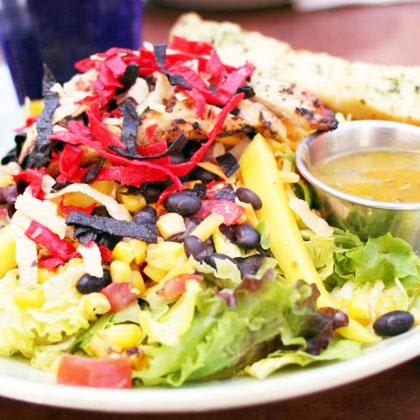 Why it’s Worse: Typically, this type of salad (which also may go by Santa Fe style or just “Fiesta”) is essentially a deconstructed taco or burrito: loaded with cheese, rice, and tortillas strips, not to mention add-ons like guac and sour cream, it can run anywhere from 800 to 1200 calories, 14g saturated fat, and more than 1400mg sodium. 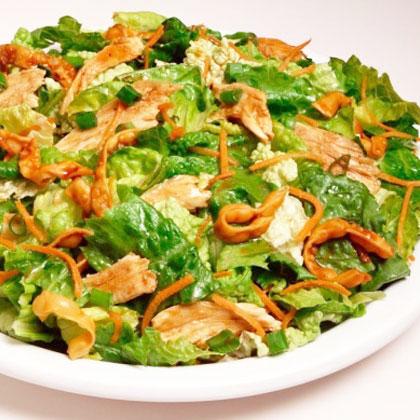 Why it’s Worse: The name is deceptively healthy, but extras like fried noodles, almonds, and a sodium-packed Asian-style vinaigrette add up to sky high calories (about 1200), alarmingly high sodium (2000mg at Applebee’s) and more than 12g saturated fat. 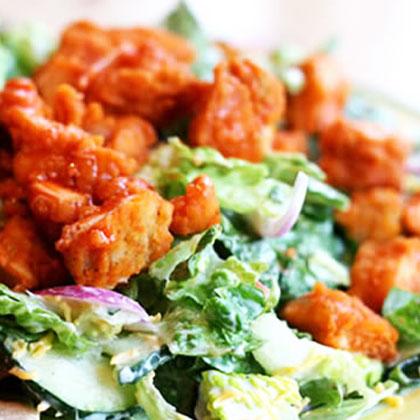 Where You’ll Find it: Chili’s

Why it’s Worse: Just like the bar food it’s named for, this chicken and bleu cheese-laden salad is a calorie and sodium fest-more than 1200 calories and a whopping (and we mean whopping) 4320mg sodium in the Chili’s version. 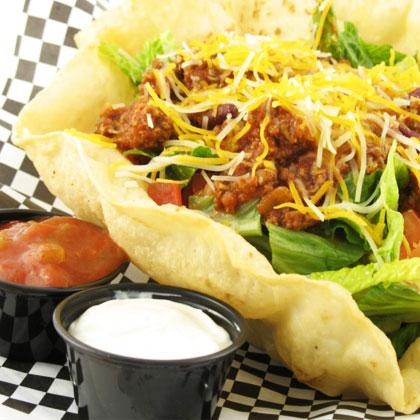 Why it’s Worse: Like its cousin the Southwest Fiesta, this is no more than a taco turned inside out. In some ways it’s even worse because you can fit so much more of those high-fat fillings-meat, cheese, sour cream-on plate than in a taco shell, spiking the calories, fat, and sodium counts: a Fiesta Taco Salad with beef at Taco Bell has 780 calories, 10g saturated fat, and more than 1300mg sodium. 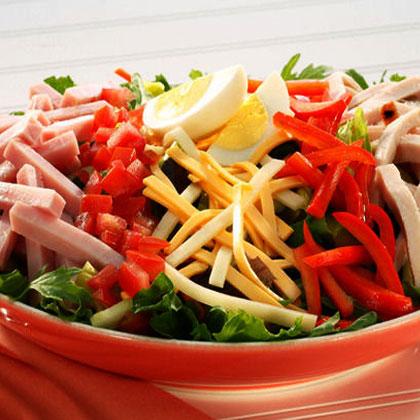 Why it’s Worse: A favorite of low-carb dieters, all the deli meats and cheeses can push the calorie count to more than 900. Add in a creamy vinaigrette style dressing and it’s even higher in saturated fat and calories. 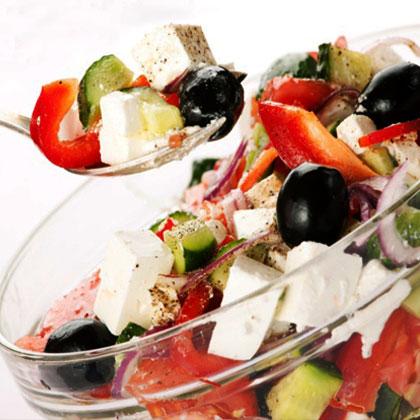 Where You’ll Find it: Cosi, diners

Why it’s Worse: While a typical Greek salad has lots of healthy ingredients (romaine lettuce, cucumbers, tomatoes, onions), the additions that give it bulk and personality (feta, olives, and stuffed grape leaves) can add hundreds of extra calories. You start with a 300-calorie base but add two ounces of feta and you’re up 150 calories; add the olives and you can add 200-400mg sodium; douse the whole thing in olive oil and rack up another 100-200 calories. While all in all not too bad as a meal (and rich in healthy fats and other nutrients), if you’re trying to lose weight, this salad could sabotage your efforts. 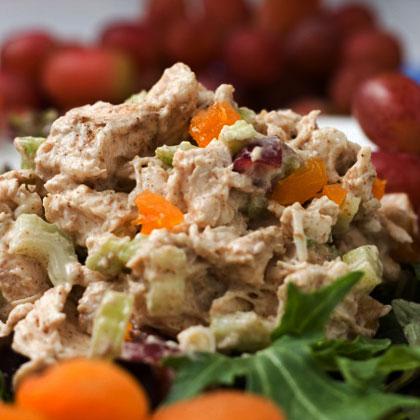 Where You’ll Find it: Diners, delis

Why They’re Worse: For women of a certain age, a scoop of chicken or tuna salad on an iceberg lettuce leaf was a 20th century dieting mainstay, but the mayo in these salads can push the calorie and fat counts as high as (if not higher than) a Big Mac-about 700 calories for one large scoop. 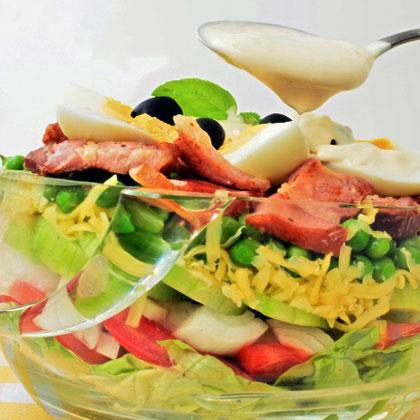 Where You’ll Find it: In food courts and big city delis 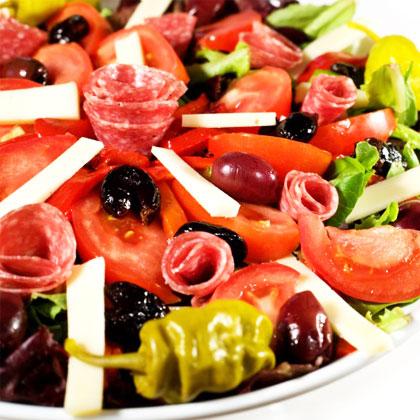 Where You’ll Find it: Salad bars, some Mediterranean-style chain restaurants

Why it’s Worse: Antipasto means “before the meal,” a time (at least in the U.S.) where salads are typically served. If the elements of a typical antipasto platter-raw and marinated vegetables, cheeses, and meats-are combined in a salad, the saturated fat count from the cured meats alone (like pepperoni) could potentially exceed 15 grams. 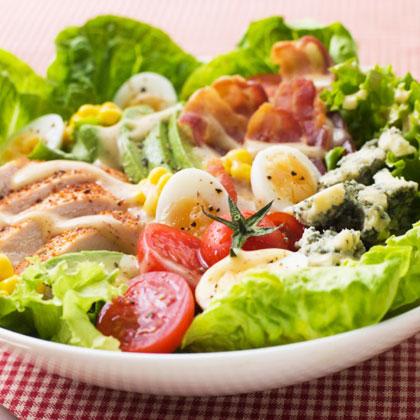 Why it’s Worse: Blue cheese, avocado, bacon, chicken, or turkey make up this classic main dish salad, and a main dish it is: depending on the portion size (and they are often huge), the salad can have upwards of 1300 calories and 10-12g saturated fat. 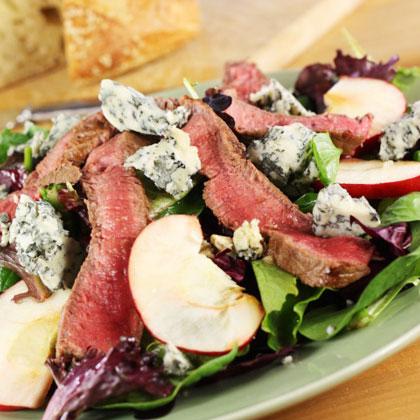 Why it’s Worse: As a protein choice, steak is often naturally high in saturated fat and calories, so add in any more high-fat additions (like the blue cheese in the chopped steak and bleu cheese salad at Panera) and you have a salad that has around 800 calories, 1200mg sodium, and 16g saturated fat.